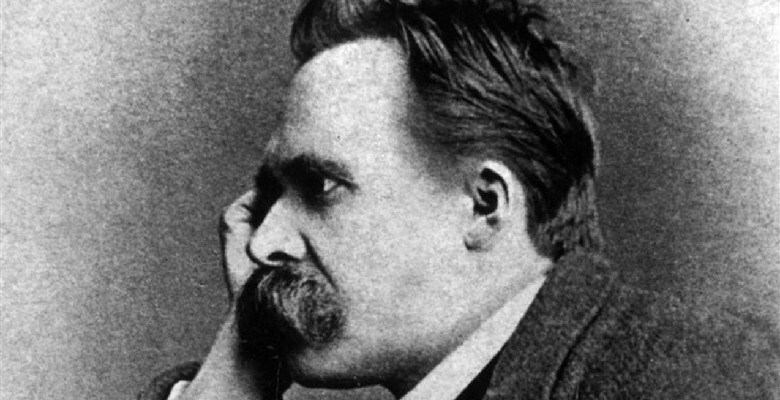 Friedrich Nietzsche was a German philosopher, essayist and social critic. He is famous for his uncompromising critique of traditional moral and religious conventions. In this passage from On Truth and Lie in an Extra-Moral Sense, Nietzsche provides an account and critique of the nature of truth. He questions how a drive for truth could have arisen given that the function of our intellect is not to find the truth but ensure our survival, and to survive in society, we frequently use our intellect to engage in deception, often self-deception.

In some remote corner of the universe, poured out and glittering in innumerable solar systems, there once was a star on which clever animals invented knowledge. That was the highest and most mendacious minute of “world history”—yet only a minute. After nature had drawn a few breaths the star grew cold, and the clever animals had to die.

One might invent such a fable and still not have illustrated sufficiently how wretched, how shadowy and flighty, how aimless and arbitrary, the human intellect appears in nature. There have been eternities when it did not exist; and when it is done for again, nothing will have happened. For this intellect has no further mission that would lead beyond human life. It is human, rather, and only its owner and producer gives it such importance, as if the world pivoted around it. But if we could communicate with the mosquito, then we would learn that he floats through the air with the same self-importance, feeling within itself the flying center of the world. There is nothing in nature so despicable or insignificant that it cannot immediately be blown up like a bag by a slight breath of this power of knowledge; and just as every porter wants an admirer, the proudest human being, the philosopher, thinks that he sees on the eyes of the universe telescopically focused from all sides on his actions and thoughts.

It is strange that this should be the effect of the intellect, for after all it was given only as an aid to the most unfortunate, most delicate, most evanescent beings in order to hold them for a minute in existence, from which otherwise, without this gift, they would have every reason to flee as quickly as Lessing’s son. [In a famous letter to Johann Joachim Eschenburg (December 31, 1778), Lessing relates the death of his infant son, who “understood the world so well that he left it at the first opportunity.”] That haughtiness which goes with knowledge and feeling, which shrouds the eyes and senses of man in a blinding fog, therefore deceives him about the value of existence by carrying in itself the most flattering evaluation of knowledge itself. Its most universal effect is deception; but even its most particular effects have something of the same character.

The intellect, as a means for the preservation of the individual, unfolds its chief powers in simulation; for this is the means by which the weaker, less robust individuals preserve themselves, since they are denied the chance of waging the struggle for existence with horns or the fangs of beasts of prey. In man this art of simulation reaches its peak: here deception, flattering, lying and cheating, talking behind the back, posing, living in borrowed splendor, being masked, the disguise of convention, acting a role before others and before oneself—in short, the constant fluttering around the single flame of vanity is so much the rule and the law that almost nothing is more incomprehensible than how an honest and pure urge for truth could make its appearance among men. They are deeply immersed in illusions and dream images; their eye glides only over the surface of things and sees “forms”; their feeling nowhere lead into truth, but contents itself with the reception of stimuli, playing, as it were, a game of blindman’s buff on the backs of things. Moreover, man permits himself to be lied to at night, his life long, when he dreams, and his moral sense never even tries to prevent this—although men have been said to have overcome snoring by sheer will power.

What, indeed, does man know of himself! Can he even once perceive himself completely, laid out as if in an illuminated glass case? Does not nature keep much the most from him, even about his body, to spellbind and confine him in a proud, deceptive consciousness, far from the coils of the intestines, the quick current of the blood stream, and the involved tremors of the fibers? She threw away the key; and woe to the calamitous curiosity which might peer just once through a crack in the chamber of consciousness and look down, and sense that man rests upon the merciless, the greedy, the insatiable, the murderous, in the indifference of his ignorance—hanging in dreams, as it were, upon the back of a tiger. In view of this, whence in all the world comes the urge for truth?

Insofar as the individual wants to preserve himself against other individuals, in a natural state of affairs he employs the intellect mostly for simulation alone. But because man, out of need and boredom, wants to exist socially, herd-fashion, he requires a peace pact and he endeavors to banish at least the very crudest bellum omni contra omnes [war of all against all] from his world. This peace pact brings with it something that looks like the first step toward the attainment of this enigmatic urge for truth. For now that is fixed which henceforth shall be “truth”; that is, a regularly valid and obligatory designation of things is invented, and this linguistic legislation also furnishes the first laws of truth: for it is here that the contrast between truth and lie first originates. The liar uses the valid designations, the words, to make the unreal appear as real; he says, for example, “I am rich,” when the word “poor” would be the correct designation of his situation. He abuses the fixed conventions by arbitrary changes or even by reversals of the names. When he does this in a self-serving way damaging to others, then society will no longer trust him but exclude him. Thereby men do not flee from being deceived as much as from being damaged by deception: what they hate at this stage is basically not the deception but the bad, hostile consequences of certain kinds of deceptions. In a similarly limited way man wants the truth: he desires the agreeable life-preserving consequences of truth, but he is indifferent to pure knowledge, which has no consequences; he is even hostile to possibly damaging and destructive truths. And, moreover, what about these conventions of language? Are they really the products of knowledge, of the sense of truth? Do the designations and the things coincide? Is language the adequate expression of all realities?

Only through forgetfulness can man ever achieve the illusion of possessing a “truth” in the sense just designated. If he does not wish to be satisfied with truth in the form of a tautology—that is, with empty shells—then he will forever buy illusions for truths. What is a word? The image of a nerve stimulus in sounds. But to infer from the nerve stimulus, a cause outside us, that is already the result of a false and unjustified application of the principle of reason. … The different languages, set side by side, show that what matters with words is never the truth, never an adequate expression; else there would not be so many languages. The “thing in itself” (for that is what pure truth, without consequences, would be) is quite incomprehensible to the creators of language and not at all worth aiming for. One designates only the relations of things to man, and to express them one calls on the boldest metaphors. A nerve stimulus, first transposed into an image—first metaphor. The image, in turn, imitated by a sound—second metaphor. …

Let us still give special consideration to the formation of concepts. Every word immediately becomes a concept, inasmuch as it is not intended to serve as a reminder of the unique and wholly individualized original experience to which it owes its birth, but must at the same time fit innumerable, more or less similar cases—which means, strictly speaking, never equal—in other words, a lot of unequal cases. Every concept originates through our equating what is unequal. No leaf ever wholly equals another, and the concept “leaf” is formed through an arbitrary abstraction from these individual differences, through forgetting the distinctions; and now it gives rise to the idea that in nature there might be something besides the leaves which would be “leaf”—some kind of original form after which all leaves have been woven, marked, copied, colored, curled, and painted, but by unskilled hands, so that no copy turned out to be a correct, reliable, and faithful image of the original form. We call a person “honest.” Why did he act so honestly today? we ask. Our answer usually sounds like this: because of his honesty. Honesty! That is to say again: the leaf is the cause of the leaves. After all, we know nothing of an essence-like quality named “honesty”; we know only numerous individualized, and thus unequal actions, which we equate by omitting the unequal and by then calling them honest actions. In the end, we distill from them a qualitas occulta [hidden quality] with the name of “honesty.” …

What, then, is truth? A mobile army of metaphors, metonyms, and anthropomorphisms—in short, a sum of human relations which have been enhanced, transposed, and embellished poetically and rhetorically, and which after long use seem firm, canonical, and obligatory to a people: truths are illusions about which one has forgotten that this is what they are; metaphors which are worn out and without sensuous power; coins which have lost their pictures and now matter only as metal, no longer as coins.

We still do not know where the urge for truth comes from; for as yet we have heard only of the obligation imposed by society that it should exist: to be truthful means using the customary metaphors—in moral terms: the obligation to lie according to a fixed convention, to lie herd-like in a style obligatory for all.